Civic Outdoor is a proud sponsor of the 2020 Indian Film Festival and are dedicated to supporting and giving voice to the culturally diverse art scene of Melbourne in what has been a challenging year for us all. The promotions will run across Civic Outdoors network of digital billboards and outdoor advertising throughout Melbourne in the lead up and during the festival. 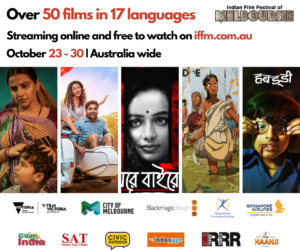 The Indian Film Festival of Melbourne (IFFM) today announced it will host its 2020 event online, in line with coronavirus gathering restrictions, screening over 60 films in 17 languages, including 34 International Premieres and 56 Australian Premieres.

IFFM Festival Director, Mitu Bhowmick Lange: “Indian filmmakers – from independent short film makers to our most powerful directors – turn their gaze to issues of freedom and equality in the contemporary world and celebrate the diversity that defines us all. Film is a powerful way to bring people together be they sitting in a packed cinema or in 2020, in their own homes.”

All films will be available for viewing free of charge across Australia from October 23 to 30. in recognition of the pressures this year has placed on many people, @IndianFilmFestivalOfMelbourne is partnering with Mental Health Foundation Australia and encourages festival participants to donate to MHO when booking.

‘Together’ is the theme of the 2020 IFFM Short Film Festival Competition which this year received a remarkable and unprecedented 3000+ entries indicating people’s creativity during lockdown. A selection of the best films submitted are available for viewing during the Festival and the winner will be announced on the final day of the Festival

And for those who have missed exploring the southern city this year, the streets and interiors of Melbourne are captured on film in ‘made in Melbourne’, a selection of short films shot over the last 12 months.

If you enjoyed reading this, then please explore our other articles below:

Back to News
Page load link
Go to Top