Iconic Billboards in the History of Outdoor Advertising

Home/Media/Iconic Billboards in the History of Outdoor Advertising

5 Iconic Billboards in the History of Outdoor Advertising

Creativity is the key to making an impact with billboard advertising. Whether it’s by making use of digital features, interactivity or simply with clever, eye-catching design, some companies have created billboards that are iconic today. Here are 5 of the best from around the world.

The Economist got creative with this interactive billboard featuring a light bulb that has a sensor on it so when someone passes under it, the billboard lights up as if they had an idea – the message being that reading The Economist gives you great ideas. It’s a real attention grabber for the person walking under it as well as any onlookers.

This is one of the world’s first-ever billboard signs to think in the revolutionary way that advertising can be more than simply words and pictures. It proves that digital billboards

have the ability to interact with their physical environment and potential customers in a more engaging manner. The inspired use of this interactive advertising technique gives a clear message that you and The Economist are connected in your everyday life.

In our opinion, what really makes this advertisement one of the best billboard ads ever is its ability to engage with both passive and active potential customers. The light bulb’s illumination grabs the attention of both the onlooking passive customers and the active customers who pass underneath it, creating a bond between all parties and the product. 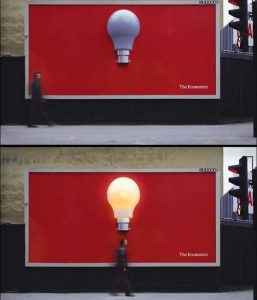 Many billboard advertisers worry whether drivers will notice their billboard on the side of the road. But when you have to go through it, it’s much harder to miss. That was the clever design approach by Oldtimer with this advertisement for an all you can eat rest stop on a tunnel entrance in Austria.

Although the advertising image itself stands out as one of the most funny billboards of all time, there’s so much more to it than what meets the eye. By making the billboard an actual reference to the message it is trying to convey (as in all you can eat), this advertisement is a masterclass of blending physical and meta-physical messages to the consumer.

Also, by combining the physical act of vehicles and their passengers being fed to the advertisement, this billboard sign’s true genius is interacting with its customer base. It helps to directly develop a relationship between the business and the customer. 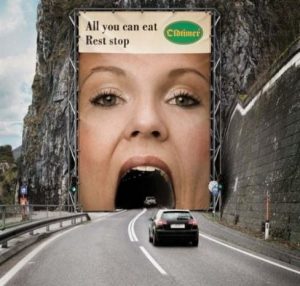 This ad is one that generated a lot of double-takes from passers-by. It involves a car dangling from the side of a tower combined with a simple billboard with the text “are you in good hands?” It’s a clever way of using the billboard’s surroundings, creating an eye-catching ad and making a clear point.

All the best billboard ads get people talking, which makes the Allstate car insurance billboard stand out amongst the others. The mixture of initial shock value and thoughtful questioning from the advertising message is both attention-grabbing and physically impactful, resulting in a striking advert that’s sure to have been a great conversation starter for many people.

Modern advertising can be as much about taking risks as playing it safe with your audience, and that’s exactly what Allstate Car Insurance achieved with this thought-provoking and iconic visual metaphor. The advertisement is not only a bold message — but also a true one. These elements are combined, creating one of the best billboard ads of all time in the process. 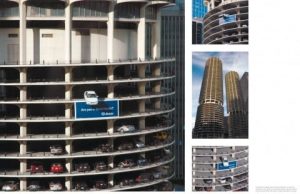 This is another example of a company making good use of the billboard’s surroundings. Car company Smart made waves when it put up a billboard ad on the middle of the Rotterdam bridge that made it look as if the car was launching from one side of the bridge when it opened. Maximum impact with almost zero text.

This classic billboards genius simplicity is that it captures the imagination of its target audience by presenting an idea that many customers will have visualised themselves. By presenting such an exciting and innovative image to its audience, Smart Brabus has engaged and entertained their audience with these funny billboards.

However, we think this is not the only reason why this advertisement will be classed as one of the best billboard ads ever. The ads ultimate strength lies in what it says about the car and its physical abilities. By making the Smart car jump a bridge, the advertisers have implied that this car is a fast, agile, city-beating vehicle that can get you out of even the trickiest of situations. 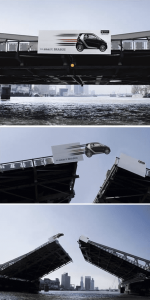 While the characterisation of the Sydney Opera House as the “biggest billboard in the city” by Prime Minister Scott Morrison was controversial, it has played that role before. When Samsung was preparing to launch the Galaxy S4 smartphone in 2013, they announced an advertising partnership with the Sydney Opera House.

The Samsung promotion relied on aesthetically pleasing images. Submitted by users, these were projected onto the opera house sails at night to give the already iconic building yet another possibility to shine, this time as one of the best billboard ads ever.

It’s clear the advertising team really knew what they were doing with this remarkable project. The combination of Australia’s most recognisable landmark and pictures provided by the general public conveys a strong message that the company is in tune with and wants to develop a strong link with the identity of the modern Australian public.

Alongside this unique interactive theme, Samsung has also shown a great deal of innovative thinking in their use of modern technological equipment. This is what Samsung wants their potential customers to think of when they consider the company itself.

This Samsung campaign goes down as one of the best billboard ads in Australia, and it certainly will be remembered as one of the most iconic and thought-provoking advertisements of all time.

As you can see from this inspirational and innovative selection of creative and iconic billboard signs, to get ahead in the modern marketplace, you need to be blending the best properties of your physical environment with the highest quality developed advertising strategy and product.

If you are based in Australia or are looking to reach a new Australian market, you need to think of how to make one of the best billboard ads ever to grab your customers’ attention. If this sounds like your company and you are looking to mount an impactful and targeted billboard or any other advertising campaign, you need to get the team at Civic Outdoor behind you.

Based in Melbourne, Civic Media offers a range of managed outdoor advertising products throughout Australia, including static billboards, digital billboards, street furniture ads and civic guides. We can help you get your message in front of the right people with large, impactful billboard advertising printed in high-quality PVC. For more information and news about the best billboard ads available in Victoria, please get in touch on 03 8580 6091 or via our website today.

If you enjoyed reading this, then please explore our other articles below:

Back to News
Page load link
Go to Top